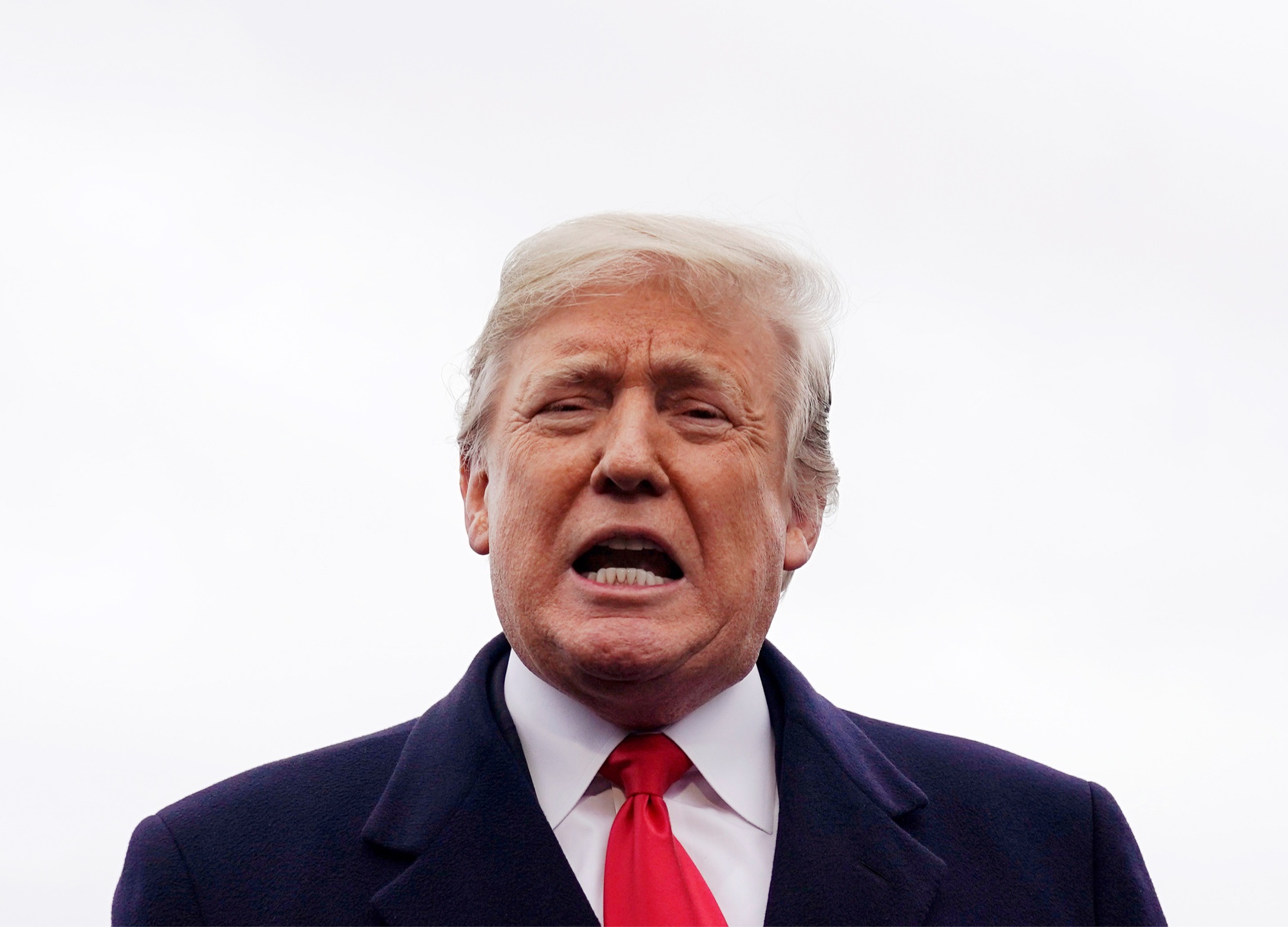 Donald Trump delivered a speech in Pennsylvania on December 10, 2019. I separated myself from the emotion of the speech and focused on its content. This is what I found.

Climate Change
Trump Quote: “The ocean is going to rise one-eighth of an inch within the next 250 years. We’re going to be wiped out.”

Facts: According to NOAA, the sea level rose 2.6 inches from 1993-2014 alone, and it’s rising about one-eighth of an inch per year. Increased sea level means additional flooding from storms that impact people and animals, and cost taxpayers billions of dollars. (Source)

Analysis: Trump’s statement is off by 249 years. Since these storms affect people from every political party, taking steps to mitigate sea-level rise should be a joint effort.

Facts: According to the Washington Post, Donald Trump has made 13,435 false or misleading claims during his presidency. (Source)

Analysis: The President of the United States should be a vocal advocate for First Amendment rights. It’s unfortunate to see people who talk about love of country abandoning one of its most cherished institutions. People sacrificed their lives for our free press, and people throughout the world are currently losing their lives fighting for a free press. Americans shouldn’t take it for granted and should defend it with the vigor our Founders fought to establish it.

A free press provides society with essential services. They uncover scandals, expose the fleecing of America, solve crimes, protect consumers, spotlight tragedy, inspire people to take action, educate readers, and hold politicians accountable. The American press is imperfect, but Americans should be grateful to live in a country with freedom of speech and the press. Trump dislikes them because they fact-check his statements.

Trump Quote: FBI agent “Peter Strzok has a restraining order against him” from Lisa Page. “That’s what I heard. I don’t know if it’s true.”

Facts: There’s no restraining order. (Page later tweeted: “Nothing like this ever happened. It’s a lie.”)

Analysis: Trump regularly peddles unfounded tabloid stories and conspiracy theories and then qualifies them by saying that’s the word, that’s what people are saying, or everyone is talking about it.

It’s ironic that Trump routinely fabricates news while complaining about fake news. It’s revealing that he’s so frequently uncertain about his accusations against people when the facts are so easily accessible.

The Stock Market
Trump Quote: Donald Trump said a man approached him and said, “Thank you, sir. My wife is so in love with me because I went up 79% in the 401K. She thinks I’m a genius. She always thought I was a total stiff–a dumb, stupid dope. She loves me now more than she ever did.” Trump added, “It shows you the power of money, right?”

Analysis: First, the balance in a 401K isn’t realized until it’s cashed out. The stock market goes up and down. Trump has taken shortcuts to prop it up: corporate tax cuts that have ballooned the national debt, a neglect of infrastructure needs, and deregulation of industries that caused previous stock market crashes.

Second, Trump’s statement is a sad commentary on how much he loves money and the prism through which he views relationships. Which religion prescribes his approach? Whose family teaches their children these values?

Finally, it’s hard to believe that someone would make such a statement, but even if they did, there’s nothing inspiring about the story, it’s beneath the presidency, and it sets a terrible example for adults and children.

The Military
Trump Quote: Trump said that he didn’t get enough credit for killing Abu Bakr al-Baghdadi. “I don’t care about press, but you know how much press I got? They gave me about a day.” Trump added, “…and with Obama, you did nothing, but get your ass kicked.”

Facts: In addition to killing Osama bin Laden, Obama made significant progress in defeating ISIS. Trump’s military strategy is a continuation of the policy under the Obama administration. The claim that the military didn’t succeed under Obama isn’t supported by facts. (Source)

Analysis: I wonder how military families perceived Trump’s statement that he didn’t receive enough credit for al-Baghdadi, especially Gold Star parents. We should expect a president to deflect military attention and direct it to the women and men risking their lives on battlefields. I also wonder how the military personnel who bravely served during the Obama years perceived his statement that they got their “ass kicked.” The Republican party prides itself on its support of the military. Is taking credit for the work of the military and denigrating their heroism patriotic?

Air and Water
Trump Quote: After boasting about how many regulations he ended, Donald Trump said, “Our air and our water are cleaner now than it’s ever been with all that we’re doing.”

Facts: According to his EPA’s statistics, “Five hundred and thirty-two American metro areas reported a total of 4,134 days in 2018 when the official air quality index passed 100, which means it is unhealthy for people with heart and lung disease, the elderly and the very young. That’s about 15% more bad air days per city than the average for 2013 to 2016, America’s clean air heyday.” (Source)

“The worst of the bad air days jumped even more. On average, in 2017 and 2018 there were nearly 140 times when a city’s air pollution reached the worst two categories — very unhealthy and hazardous — with the air quality index greater than 200. That’s more than two-and-a-half times the average of nearly 55 from 2013 to 2016. About 100,000 Americans each year die prematurely because of polluted air.”

On the issue of water quality, Trump repealed an Obama clean water regulation, known as the Waters of the United States rule, that limited the chemicals that companies could use near streams, wetlands, and other waterways. It previously kept drinking water safe for more than 100 million Americans. He’s now working on undoing the 1972 Clean Water Act. Deregulating companies that pollute waterways doesn’t make water cleaner. (Source)

Analysis: Trump makes the air and water claim to offset concerns people have about deregulation. Many Americans recall getting fleeced by Wall Street and the banks when Republicans deregulated them, and many Americans have died or suffered injuries or illnesses as the result of deregulation in the workplace or their community. He understands their memory could pose a challenge to his actions so he regularly offers the air and water claim to keep them at bay. Trump is propping up the economy at a dangerous cost to Americans’ health, safety, and well-being–and he’s being dishonest to his supporters about it.

Veterans
Trump Quote: “We now have the ability to fire all the bad people that are in the VA.” He also claimed veterans can go to any doctor as a result of his efforts.

Facts: Trump’s statement implies that the ability to fire people at the VA didn’t previously exist. During President Obama’s years in office, underperforming employees were fired from the VA, but it didn’t solve the VA’s problems. Also, giving veterans the option to visit doctors outside the VA network, known as Veterans Choice, was signed under Obama. (source)

Analysis: The issues at the VA extend beyond firing people though. There’s a need to fix a system that is plagued with delays in services and claims, inadequate healthcare, wasteful spending, and turnover in leadership that makes it difficult to implement changes. These problems aren’t Trump’s fault as they have been going on for decades (Lyndon Johnson, Nixon, and Bush created these problems by overburdening the VA with millions of veterans from wars that should have never happened), but it’s a false statement to imply that people weren’t previously fired at the VA.

Providing quality medical care to people who served our country shouldn’t be a political issue. And simply firing people isn’t the answer. If Trump has made improvements, he should speak specifically to them. Have the delays been reduced? Has the quality of care improved? Is wasteful spending down? Obama’s record on the VA was mixed. If Trump has done a better job reforming it, he should provide details.

Immigration
Trump Statement: Donald Trump spoke disparagingly about people not using U.S. ports of entry. He rattled off a list of crimes allegedly committed by a few immigrants and gave the impression that they’re all violent and dangerous.

Facts: The facts about people who come to the U.S. legally and illegally don’t match the impression Trump depicts. Logic informs us that if people are safe, fed, and free, they would not be inclined to risk their lives to enter another country. It defies common sense that families from El Salvador, for example, would go to such lengths so they could come to the U.S. to kill people. Cherry-picked incidents, while tragic, should not be used to define millions of suffering and at-risk people in search of mercy and kindness. (Source 1, Source 2)

Analysis: The solutions to immigration issues are complex, and include investments to stabilize governments, economies, and law enforcement in other countries. We should work together as a nation to resolve these issues rather than using others’ misfortune as a political weapon.

Income and Employment
Trump Quote: “When I was campaigning here three and a half years ago, you weren’t doing so well. Wages were way down and unemployment was way up. It wasn’t a pretty picture.”

Facts: According to the Bureau of Labor Statistics (chart below), the unemployment rate in Pennsylvania was 8% when President Obama took office in 2009. When Obama left office in 2016, it was 5.4%. It’s now 4.3%. Thus, unemployment under Obama was way down, not “way up.”

Obama inherited a historic recession and reversed a trend; Trump barely continued a downward trend and did so by taking shortcuts: tax cuts for wealthy corporations, deregulation at the expense of people, animals, and the planet, and a ballooning of the national debt by $3 trillion despite promising he would take it to zero.

Facts: Only two months ago, Trump was using $5,000 as the gain; he’s now using $10,000. According to the Census Bureau, the figure is $1,380, not $10,000, and his Obama stat doesn’t account for the recession Obama inherited. Trump also doesn’t factor in the impact of his deregulations on people, animals, and the planet–and how they provide a shortcut to profits, or how his tax cuts have increased the national debt. Also, according to factcheck.org, wages were up for the eight years of the Obama administration. (Source)

In the speech, Trump also referred to the FBI as “scum,” called President Obama “Barack Hussein Obama,” said Elizabeth Warren has a “fresh mouth,” said Representative Maxine Waters has a “low IQ,” debased a corroborated whistleblower, attacked the legal principles of the U.S. Constitution’s impeachment process, and encouraged security to be rougher with a protester exercising their constitutional right to free speech.

Americans should expect better conduct and more accurate information from a President of the United States.

2 thoughts on “The Anatomy of a Trump Speech”