Tyson Foods, which reported sales of $41 billion in 2015, kills more farm animals per year than any company on earth–approximately 6,000,000 chickens, 30,000 cattle, and 48,000 pigs every day. The company operates in more than 130 countries throughout the world including China, Russia, and Mexico. Their brands include Tyson, Jimmy Dean, Hillshire Farm, Sara Lee, and Ball Park.

But Tyson Foods may be changing. They recently bought a 5% stake in plant-based food company Beyond Meat. Beyond Meat makes the Beyond Burger, Beast Burger, Grilled Strips, Beefy Crumbles, and many other popular food products. In addition, Tom Hayes, the new CEO of Tyson Foods, recently stated that the future of animal agriculture is likely meatless. This is a startling statement that likely demonstrates his awareness that given consumer trends toward more environmentally sustainable, healthier, and humane food, and the recent competition by plant-based meat companies, the future of animal agriculture is at-risk.

Given Tyson’s dominance in animal agriculture and their recent interest in plant-based meat, animal advocates should encourage them to make their own plant-based food.

Tyson Foods has the financial ability, consumer trust, shelf space, brand awareness, and marketing power to thrive in the plant-based food industry. Their entry could be a game changer in the industry. 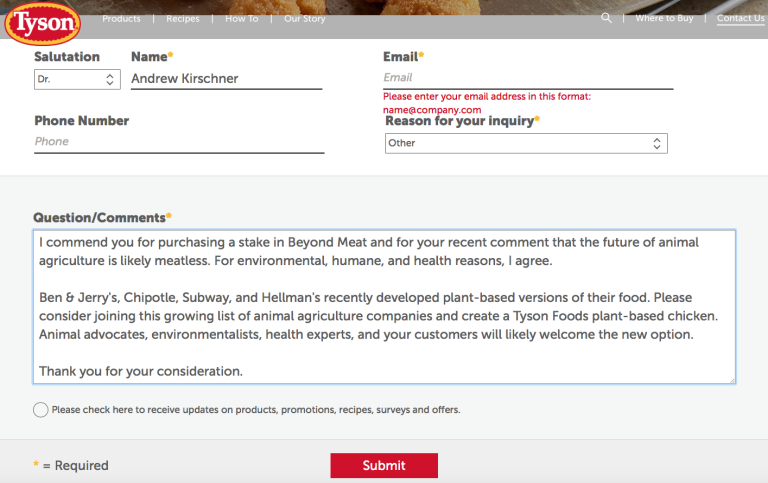 20 thoughts on “What Would Happen If Tyson Foods Changed?”