Move over animal agriculture. A wave of plant-based companies are reinventing the food system with delicious, humane, sustainable, and healthier options. As the plant-based food revolution spreads, there are certain benchmarks deserving of special attention from the first Tofurky roast to melting cheese and a cultured meatball.

Another breakthrough has arrived: The Impossible Burger. The newest innovation to hit the market, the much-anticipated creation by Impossible Foods, offers the traditional taste, smell, sizzle, and experience of a traditional burger made from cows. It even bleeds. For more than three years, scientists have worked on mimicking everything that makes a burger a burger to people who crave them. The end result is going to change the way people eat forever–and that’s not all. The Impossible Burger uses less water, land, emissions, and energy to create because it’s made from plants. It also contains no hormones, antibiotics, and cholesterol found in burgers made from animals. And, of course, it doesn’t require killing animals to make it. 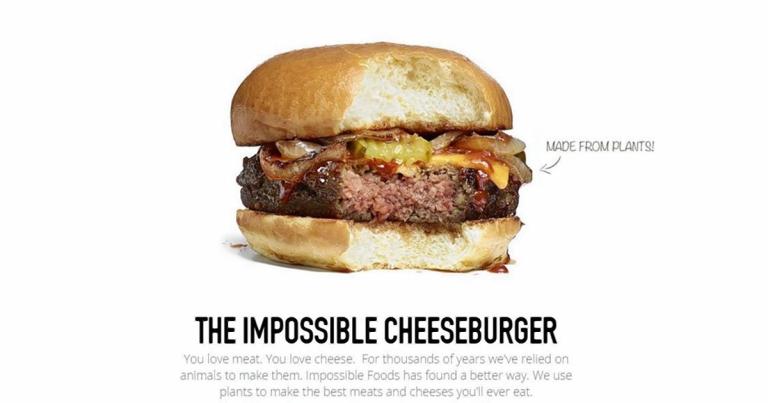 The world is buzzing over the creation of the Impossible Burger, the first raw, juicy plant-based burger. What was the inspiration for it?

Patrick O. Brown, M.D., Ph.D, was on sabbatical and reflecting on what he could do, given his training and experience as one of the world’s leading biochemists, to make the largest and most positive impact on the world.  He realized there was a better way to make meat – directly from plants – that would taste delicious and be better for the environment.  He founded Impossible Foods in July 2011 to pursue that objective. Prior to that, Dr. Brown had been a leading research scientist at Stanford University.

You spent years with scientists developing this burger. How does it differ from other plant-based burgers on the market?

Impossible Foods is doing something that has never been done before: making meat directly from plants.  We are the first company to extract specific proteins from plants and then combine them with simple, natural ingredients like amino acids, vitamins and fats to create raw meat from plants.  Most other approaches use off-the-shelf ingredients to create their products.  At Impossible, we’ve reverse engineered meat to determine how it is made from plants so that we can make the same thing without using animals.

We’re making burgers for people who love meat and are looking for the most delicious burger they can buy at the best value.  We aim to deliver, without compromise, every pleasure that meat lovers get from burgers — from the visual appearance and versatility of the raw meat, to the sizzle, aromas and changing appearance during cooking, to the ultimate taste and texture of the burger.

The burger will initially cost about the same as a higher end “better burger,” but as we scale up production over the course of a couple of years, the burger will cost the same or less than the least expensive conventional burgers. Our goal is to provide a better alternative to as many people as possible.

When and where can we expect to buy the Impossible Burger?

We are launching the burger later this summer. Our website will have information about where the product will be available. Initially, the Impossible Burger will debut in select restaurants in San Francisco, New York City and Los Angeles.

Why should people buy an Impossible Burger instead of a hamburger made from cows?

Making meat and dairy products from plants has a much lower environmental footprint compared to their conventional counterparts. For example, compared to conventional meat, producing Impossible Burgers requires 1/12th the land, 1/9 of the water and generates about a quarter of the greenhouse gas emissions. The ability to make nutritious meat and dairy products from plants can help preserve our natural resources and provide people around the world with safe, plentiful and affordable food.